Another Round of Uber Fare Cuts

Another Round of Uber Fare Cuts

Uber just announced a regional fare cut – on July 31, UberX fares for the South Bay and East Bay will be reduced by 15%, while San Francisco’s fares remain unchanged. 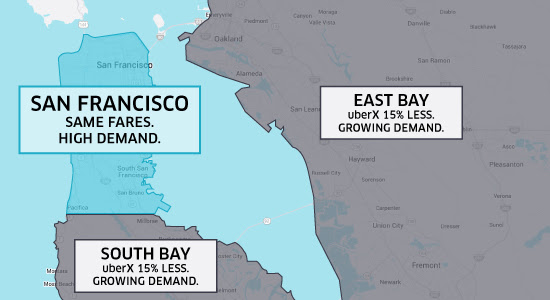 What does this mean for the drivers and riders?

As an Uber driver, my first reaction when I saw the news release was, “Oh, no, another fare cut? This is going to hurt my earnings!” But when I thought about it more, I realized my income may actually go up. As economics 101 tells us, lower prices generally creates more demand. In this case, lower fares could mean an increase in riders, giving drivers more opportunity to make money.

Uber had already reduced fares several times in the past, and it claimed drivers’ earnings actually increased with fare reductions. I was not a driver during the previous reductions, so I can’t attest to this claim. The chart below was released by Uber in the last round of fare cuts. 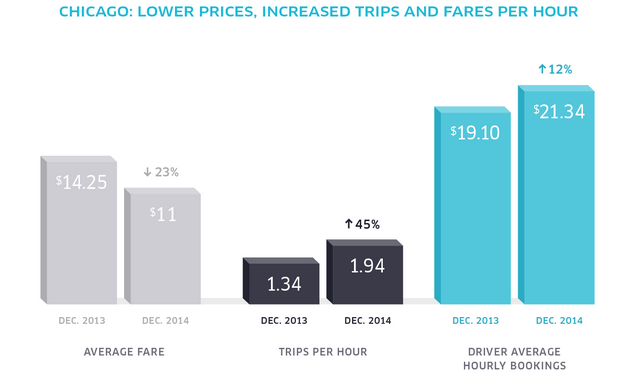 At the first glance, a 23% decrease in fares indeed led to a jump in trips per hour and earnings. The chart seems to back up Uber’s original claim. But when looking at it closely, we spot a different story. As the number of trips per house increased by 45%, you would expect a proportional increase in earnings. However, that’s not the case – the earnings only went up by 12%. This means with the slashed fares drivers had to work a lot harder to earn just slightly more.

Along with this fare cut, Uber also announced an hourly fare guarantee of $21/hour during peak times as demand grows. It requires drivers to accept at least 90% of trips, must be online for at least 1 hour and do at least 1 trip per hour, during peak times. This guarantee will be beneficial if drivers’ hourly bookings are less than $21, while it allows the drivers to earn $15.75/hour ($21 – 25% Uber commission). On the other hand, the guarantee will not be helpful for those drivers who are hustling and trying to earn as much as possible.

While I applaud the potential for drivers to earn more money, I can’t help feel frustrated that drivers will have to work more even if they simply want to maintain their previous earning level. That said, I will continue to drive with Uber as long as it continues to generate positive income for me.

Uber and Lyft Services Won’t Stop in California, for Now…

New driver may receive a promotional bonus when you sign up to drive with Lyft! Promo offers may vary.

Rideshare Connection is not owned or operated by Uber Techonologies Inc, Lyft Inc, or any other companies mentioned on this website. We may receive financial compensation if consumers choose to utilize the links provided on this website to purchase products or sign up for services.